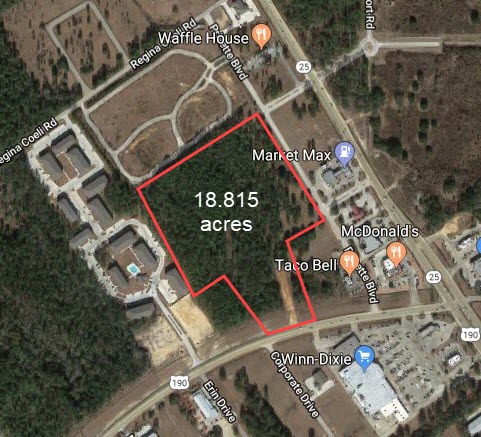 It took over two years for Louisiana Commercial Realty to finally sell 18 acres of land in Covington, but there were some big obstacles to overcome including a wetlands determination, city council resistance, lawsuits between family owners and even a breach of an agreement by the city to provide utilities. The $2.2 million sale of the Privette land site at highway 25 and 190 was one of the largest parcels sold that was zoned as Regional Commercial and allowed a wide variety of commercial uses including medical clinics, multi-family, hotels, nursing homes and drive-thru restaurants.

The 18 acres comes with an interesting history, having been part of a 100 acre site owned by Richard Privette and his brother in the early 1900’s and was originally Covington’s first airport. The brothers built an airplane powered by a model T engine and flew it successfully in the 1930’s until it was destroyed by hitting a stump on the land where the Taco Bell now stands.

While the average time it takes to sell vacant commercial land in Covington is 12 months, Robert Hand, a broker with Louisiana Commercial Realty, explains why it took almost 3 years to secure a buyer:

“We started by creating a marketing plan that included advertising the land to developers locally but also nationally. We stressed the strengths of the site, which were the size and demographics. Of the 122 vacant properties for sale, only 6 were this large and zoned for apartment development. We got the property in front of thousands of potential buyers and had the land under contract within six months, but that buyer was not able to secure financing, and after tying up the property for 18 months, they terminated the purchase. The silver cloud is that because we draft our own purchase agreements, we were able to get the buyer to pay $100,000 to our client for time extensions, and they were able to keep that money even though that sale fell through. We then re-marketed the property and were able to bring in two more offers within 8 months.”

The airport is long gone, and the land now is scattered with fast food restaurants, apartments and grocery store shopping centers, as a result of a growing Covington population. One of the common ways to measure population growth is by traffic counts, and the data show the intersection of highway 190 and 25 sees approximately 22,000 cars per day which is the highest count of any highway that feeds from Interstate 12.

Drilling Down Into Demographics

Developers looking for potential sites will closely analyze population trends and this makes Covington an attractive location for retail and multi-family development. According to ESRI, a demographic research firm, the Covington population within a 5 to 10 minute drive time of the site is projected to exceed 14,500 in 2023, with 5,434 households that average $58,000 household income.

Since developing a large parcel of land can include apartments, retail stores and shopping centers, with a total investment between $25 and $50 million, buyers first examine population trends to make sure their development is feasible. Broker Hand explains:

“We use the latest technology to determine what developments are feasible by examining consumer spending patterns; for example, within a 5 minute drive time of the site, the population spends more than average on gluten-free labels, asthma and arthritis drugs, contact lenses, and visits the ear, nose and throat doctor or their gastroenterologist more often than others in St. Tammany Parish. We discovered that health care spending was a major expense, with an average $39,000 annually spent on nursing home care, which was not only higher than the parish average but also higher than the national average. That research allowed us to target those markets as buyers.”

Where Do Nearby Residents Spend Their Money?

In addition to income, age and population trends, the latest technology allows buyers to understand the lifestyle of the nearby population, which in turn helps visualize what businesses are feasible to serve the existing population and therefore might be the most successful. This technology, called Tapestry Analysis, breaks down the entire U.S. population into 62 categories, depending on leisure activities, spending, interests and a person’s goals and desires. The 3 most common tapestry groups for this site are Soccer Moms, Family Foundations and Salt of the Earth.

Soccer Moms is defined as an affluent, family-oriented market with a country flavor. Residents are partial to new housing away from the bustle of the city but close enough to commute to professional job centers. Life in this suburban wilderness offsets the hectic pace of two working parents with growing children. They favor time-saving devices, like banking online or housekeeping services, and family-oriented pursuits.

What Is A Soccer Mom?

In summary, gone are the days of just putting a sign up to sell commercial property. Today, buyers can use sophisticated technology to determine consumer spending which determines what businesses will succeed, allowing them to be more confident about investing their $50 million.