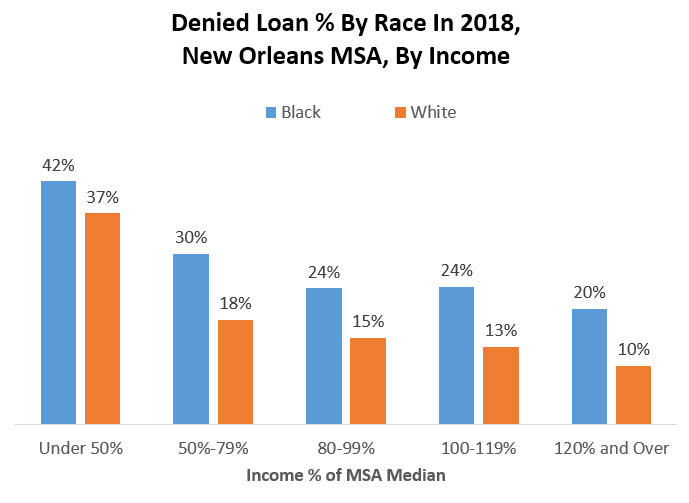 In 2018, African Americans in the New Orleans/Metairie area were denied as much as 85% more loans when compared to white applicants in the same income bracket, according to research by commercial broker Louisiana Commercial Realty. Data from the Consumer Financial Protection Bureau show that 24,571 loans for New Orleans home mortgages were made in 2018 totaling $5.3 billion, but African Americans were denied loans totaling $303 million, or approximately 25% of applications, compared to a denial rate of 12% for white applicants.

There are many reasons for loan denial. For home purchase applications, lenders cite low collateral as the most common denial reason. For refinance applications, lenders cite the debt-to-income ratio, insufficient cash, unverifiable information, and incomplete applications as the most common denial reasons. However, these common reasons would not fully explain why the denial rate was higher across the board for any income bracket, even those with income above the median average. Louisiana Commercial Realty researched the data as part of their efforts to revitalize New Orleans East, and commercial broker Robert Hand explains:

“My firm has focused on bringing business to New Orleans East for the last 10 years, so we were curious as to why people were constantly unable to obtain financing to start new businesses even though entrepreneurs had great ideas and the businesses were feasible. When we examined the mortgage numbers, we found that at every level of income, African Americans were denied a much higher percent of loans than whites in New Orleans and Metairie, and also denied loans at a higher rate than the national average.”

The study examined 5 income brackets relative to the median income in the New Orleans and Metairie area:

Results show, even in the income bracket 100% to 119% of the New Orleans average, that denial rates were 24% for African Americans, but only 13% for whites. Percentage-wise, that’s an 85% difference and totals $303 million. Since the average loan application was $155,000, that would have denied an additional 1,954 home purchases.

Where Mortgage Information Comes From

The mortgage data is available from the Consumer Finance Protection Bureau, which was established in 2010 under the Dodd-Frank Act and is an independent bureau within the Federal Reserve System, with a $500 million budget financed by up to 12% of Federal Reserve revenues. The Bureau collects the data with the power enabled by the Home Mortgage Disclosure Act, enacted by Congress in 1975 and implemented by Regulation C which requires financial institutions to maintain, report, and publicly disclose loan-level information about mortgages. These data help show whether lenders are serving the housing needs of their communities and designed to shed light on lending patterns that could be discriminatory.

For more information on the New Orleans commercial real estate market, read our other articles:

What Businesses Will Thrive In New Orleans East