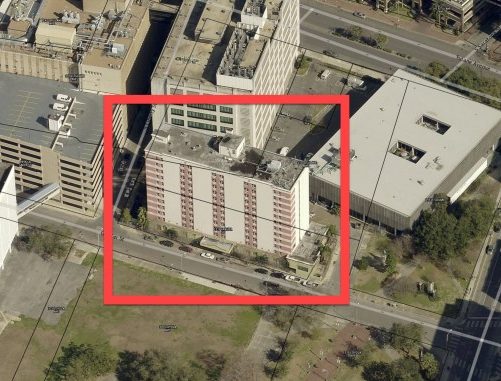 In 2020 it was reported that the vacant-since-Katrina 197 room Warwick Hotel at 1315 Gravier in New Orleans sold for $8 million, but like so many commercial properties in 300 year old New Orleans, it has a fascinating history including the mysterious death of an owner, a $300 million dollar fraud, Israeli organized crime, a grisly double murder, connections to the president of Israel and also a local prominent attorney, not to mention an uncanny ability to avoid any fines for building code violations for 14 years.

The Warwick Hotel is a 12-story, 120,000-square-foot dilapidated hotel and vacant since Katrina. It was originally constructed in 1952 but renovated in 2000 and previously under the Ramada Inn and Comfort Inn flags. The 176 room property includes 22 oversized one-bedroom suites, 8 junior suites, rooms with one king or two queen beds and handicap-accessible rooms. The hotel is closed and rooms are gutted and some have mold.

The property records date back to 1951 when it was leased to the Warwick Corporation until sold in 1997 by owners Warwick Exchange, LLC and Rosary Hartel O’Neill for $1,300,000 to Warwick Corporation with Rob Mouton as the attorney at that time helping with the purchase. Recently the attorney was changed to Marc Dorsey who is related to a prolific developer in New Orleans owning retail centers in New Orleans East and hotels downtown.

The primary owner of Warwick was Joseph Soleimani, who also owned the Sea Club Resort in Ft. Lauderdale, but in 2013 ownership of the Warwick was transferred to Shimon Levy. Soleimani died the next year. Levy was reported by David Kidwell at the Miami Herald as having ties to Israeli organized crime and spent a year in an Israeli prison. Levy was also convicted of tax evasion. His business partner at the Sea Club was Zvika Yuz who was shot in the face as he parked his car at the hotel. Yuz was an Israeli native who lived in Miami and was instrumental in one of the largest fraud schemes in Florida history, masterminding his 36 employees who bilked 1,800 investors out of $300 million. Yuz was believed to have been connected to the “List of 11”, known as the top 11 Israeli organized crime figures. Yuz’s business partner, Shimon Levy, spent a year in prison in 1981 after he helped hide two top organized crime figures wanted in a grisly double murder in Israel.

Warwick owner Levy was granted a visa to enter the US because immigration officials were unaware of his Israeli conviction as an accessory to murder since former Israeli president Chaim Herzog ordered Levy’s records destroyed.

Shimon Levy decided to let the Warwick Hotel sit vacant for 14 years, willing to forgo millions in lost income if the hotel had been in commerce. The common belief was that the purpose of Levy owning the hotel was simply to park illicit profits from crime and drugs, not so much as to make money.

The daily business operations for the vacant hotel were left to Yoram Moussaieff, who also operated Revolt which was affiliated with Federal Jeans, an outlet in New York with reported $15 million in blue jean sales. Yoram and I discussed putting the property back into commerce several times over several years, and he arranged a tour in 2017. The building was dilapidated with mold and stripped of any copper wiring which was common for neglected buildings after Katrina, but not so common 14 years later. After walking through each of the 12 floors with a contractor, we estimated it would take approximately $10 million to put the 197 rooms back into commerce, so our price for the property was $12 million. The owners thought it was worth $20 million, as-is. So the building sat vacant for another year.

Then the general manager called to report he had an offer for $18 million but would sell for $20 million to anyone else. The numbers just don’t work at that price, but it appeared none of the principals listed by the Secretary of State for the Warwick Corporation (Shimon Levy, Eldad Israel and Yoram Moussaieff)  had been to the property in 14 years since Katrina destroyed it, so they were unaware of a realistic value.

As a commercial real estate broker in New Orleans, I regularly analyze financials to determine a property’s appropriate market price. After touring the Warwick and walking through each of the 176 rooms on the 12 floors, I prepared the best and worse case scenario below and other financials. This simple analysis gives you an insight into how a buyer approaches a valuation by working through the numbers backward. First you calculate the revenues you would generate after the project is finished. Then you back in expenses. What is left over is how much you can pay for the property now.

In the worst-case scenario, the most elastic variable is the occupancy rate. For hotels, a bad number is 60%, which we saw a lot of during the 2008 recession. Room rates for high-end hotels can average $150, but during the August hot month, even good hotels drop their rate to $100. This is a $50 drop, which is 33% and a disaster for hotels. So assuming the worst 60% occupancy but keeping the rate at $150 per night, the pro-forma revenues total $5.7 million and expenses average 60% at $2.3 million for a profit of $2.3 million annually. That values the hotel at $28 million, so you never want to have more than $20 million in an investment like that, because you have to allow for at least $8 million as compensation for putting your capital to work in this project versus something like an oil well. Hotels are so risky that recently on a different project, 5 local banks refused to loan $5 million to a buyer who had $1 million deposit on a $6 million dollar renovation loan. So buyers have to be compensated for their risk especially when financing is difficult. That makes this scenario really a break-even transaction which scares most buyers away.

The best-case scenario is what developers hope for but never count on. What if the occupancy rate rose to 80%? They survive on a night when a convention in town, Essence Festival, Jazz Fest, Mardi Gras, or any other reason we hope to have 13 million visitors like we did before Covid. If occupancy rises above 80%, the room rate could climb to $225, then the revenues jump from $5.7 to $11.5 million and the net operating income approximates $4.6 million, valuing the business at $57 million. A well-run hotel can be very profitable, but there are very few who can run one well, which is why no bank wants to loan money to buy one.