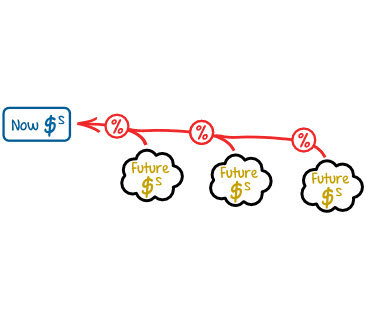 The best single tool that you can use over and over again in a variety of situations to help you make smarter real estate decisions is a mathematical formula called Present Value. You can use it whenever a deposit is made on property to determine the lost income, or when a buyer agrees to pay money sometime in the future to a seller, or in terminating a lease prematurely, or in determining how rent payments might apply toward a purchase price, or in deciding whether to lease or purchase, or in figuring how much to pay for property that produces income. It works not only in real estate but also in valuing investments and anytime you need to put into current dollars a flow of money that lies in the future.

There’s An App For That

Present Value is used anytime you have money paid in the future but need to know what it is worth today in order to make the right decision. Present value helps you put different scenarios of cash flows on the same playing field so that you can compare the options. Even though there are templates and apps that can do the work for you, it helps to understand the basics. The Apple Store has dozens of Present Value apps. Even the US government will give you a template to use for GSA contracts. But the best way to understand how the math tool helps is to use a simple spreadsheet.

How To Get Out Of A Lease

Let’s set up an example and work it through. One real life example is how to get out of a lease. A lease commits the tenant to a long term payment, in return for the predictability of having space in which to operate. Just ask the New Orleans Roly Poly sandwich shop owners, previously on Tchoupitoulas and Jefferson, why a lease commitment is important. You’ll have trouble finding them though because they did not have a long term lease and when the property owner wanted to build a Regions Bank branch, Roly Poly is no more. They shut down Roly Poly entirely, lost their income and the building was demolished by the landlord. So leases are good things to have. The commitment when obtaining a lease is that you will lease the property for several years. More often than not, you will personally guarantee the lease and the property owner will come after any personal assets if you terminate the lease prematurely.

Present Value is the following formula:

Don’t let the denominator throw you. The Present Value (PV) is the Future Value Payment (C) divided by the Assumed Growth (1+i) where i is the interest rate expressed as a decimal, times the number of periods money is paid (n).

Here’s How To Make It Understandable

Assume you have a 5 year lease with monthly payments of $10,000 and you want to get out of the lease that started January 1, 2021. You are obligated to make 12 monthly payments totaling $120,000 per year for 5 years or a grand total of $600,000. But you don’t offer to pay the landlord the entire $600,000 now to terminate the lease because he would normally have received that in future monthly payments, and a lump sum now can be invested over the next 5 years to grow to more than $600,000. So how much is $600,000 over the next 5 years worth in current dollars as a lump sum? So our spreadsheet starts like this:

In the Present Value cell, enter the formula: =120,000 ÷ (1+.05) where .05 is 5% which is an assumption of the interest rate or growth rate of that money. Our (n) value equals 1. If you were earning your MBA, the professor would instruct you to use the Treasury Bill rate for n, but we are not in MBA class so in this case it is 5% which is an assumption factoring in risk to come up with an interest rate that the landlord would need to earn on your lump sum to replace the lost income you are no longer paying. So now our formula looks like this:

To get more accurate you can compound the cash flows monthly, and assume you get all the income at the midpoint of the year, but in that case you would want to use a template. Now we have to carry this out for 5 years to determine the total amount, so our spreadsheet looks like this:

The only change is that in each subsequent year the present value formula adds another (1+.05) to the denominator.

All you do is add up each year’s Present Value for a total of $519,537. This is the amount in current dollars invested at 5% that grows to $600,000; therefore, this is the maximum amount a tenant would offer a landlord today to cancel a 5 year lease with payments of $10,000 per month.