A few weeks ago the U.S. Bureau of Labor Statistics announced inflation rose 7.9 percent from February 2021 to February 2022, the highest increase since January 1982. That was the month Dwayne Wade, Pete Buttigieg, Kate Middleton and the Commodore 64, an 8-bit home computer, were born, and the year Michael Jackson released “Thriller”, Epcot opened and the movie ET made its debut. Unemployment in 1982 was 9.7 percent, the prime rate was 17 percent and Ronald Reagan was president. It was 40 years ago, so today’s high inflation period is more of an outlier than a persistent trend. In this article, Louisiana Commercial Realty looks at the components of inflation and how the way you quote it can be misleading. 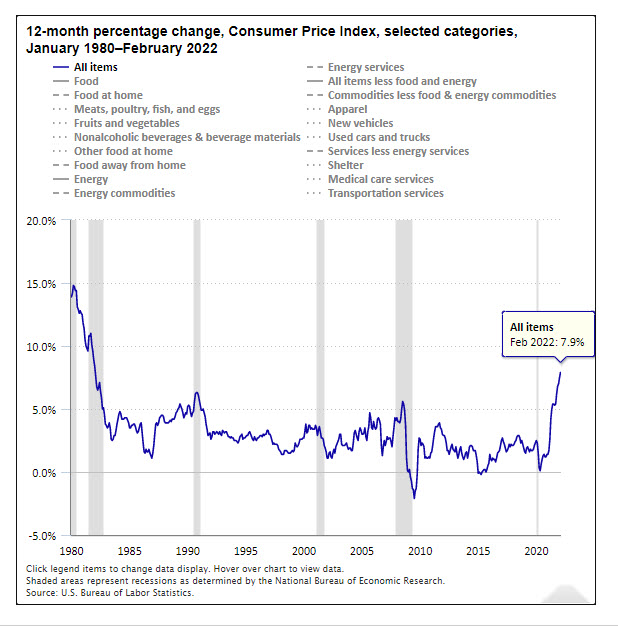 Price increases for gasoline, shelter, and food were the largest contributors to the Consumer Price Index, which is how we measure inflation. The chart above shows inflation over the last 12 months and the major components that comprise the index. Here is how those components have performed:

The table below shows the components of the CPI and their performance each month from August 2021 to February 2022, plus each component’s price increase for the last 12 months. Notice how each month can have a wide variety of price increases but can also have price decreases. Don’t be misled when your TV news announces an inflation number for one month and extrapolates that into an annual CPI number. You cannot do the math that way. 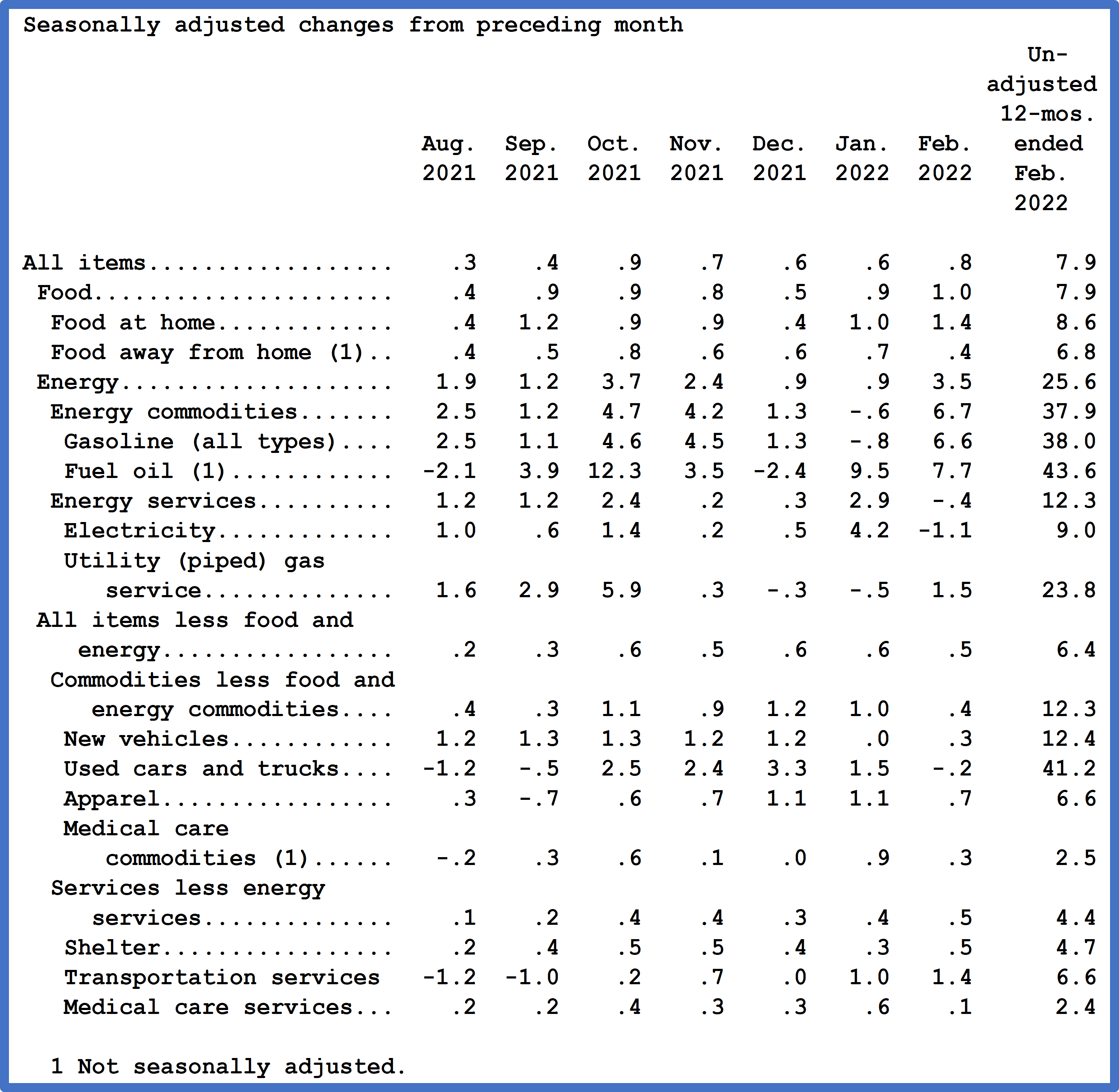 Price increases for the month of February varied for these components:

All Items Less Food and Energy

The index for all items less food and energy rose 6.4 percent over the past 12 months, with all of its major component indexes rising. The shelter index rose 4.7 percent over the last 12 months, its largest 12-month increase since May 1991. Several transportation indexes showed large increases over the past year, including used cars and trucks (+41.2 percent), new vehicles (+12.4 percent), and airline fares (+12.7 percent). 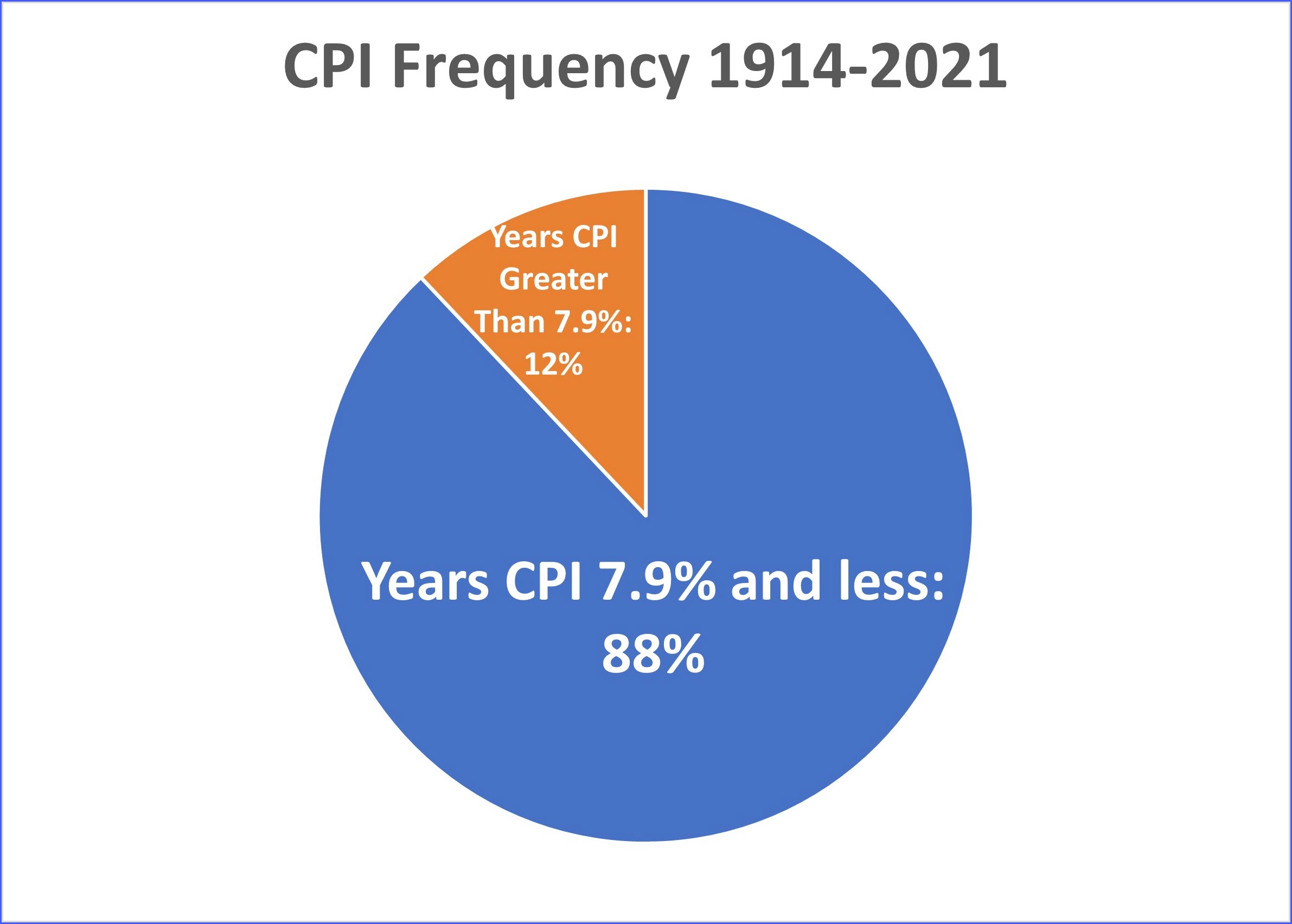 The Consumer Price Index is calculated as a single number but is actually 8,018 items grouped into major components which are each affected by supply and demand in their own way, resulting in some components increasing in price rapidly while at the same time others can decrease in price. Since 1914, the CPI has only been above 7.9 percent 12 percent of the time, so the inflation period we have only experienced the last 6 months will not last much longer. In the last 108 years, there have only been 7 periods when inflation was 7.9 percent or higher, with the average period lasting 26 months. These were all periods experiencing an imbalance of supply and demand due to external forces of world wars or a sudden OPEC oil embargo. The beauty of a free market economy is that these supply and demand imbalances are eventually corrected by entrepreneurs and businesses, each acting in their own best interest and motivated by ownership which provides an incentive to compete to provide the best product at the lowest price, which results in bringing prices back into equilibrium.

For more info on how inflation affects commercial real estate, read our article:
3 Common Mistakes In Every Lease