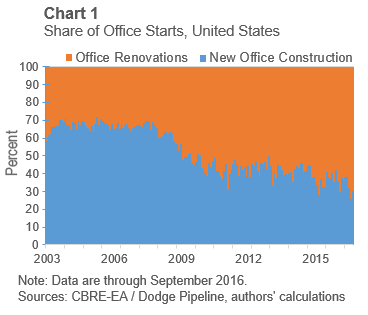 Researching construction activity across 382 metropolitan markets in the United States, data show new office-construction projects were double office renovations from 2003 to 2008, but then everything changed when financing dried up for new construction projects due to the mortgage industry meltdown and collapse of financial institutions. The surprise is that this 2008 trend still affects the office market today.

Office demand nationwide has been steady and is somewhat correlated to GDP but can vary widely by market. In major cities, Class A office space is in high demand, but in smaller markets, office rates are often offset by substantial free rent and tenant improvement allowances. Until financing for new construction becomes more available, new office construction will continue to decline. Eventually this will lead to higher lease rates, which will, in turn, lead to new construction. The free market system will always drive toward equilibrium, so keep on eye on lease rates which will trigger the trend change.

For more information on the office market, read our articles:

Office Lease vs Sale Prices In New Orleans and Metairie