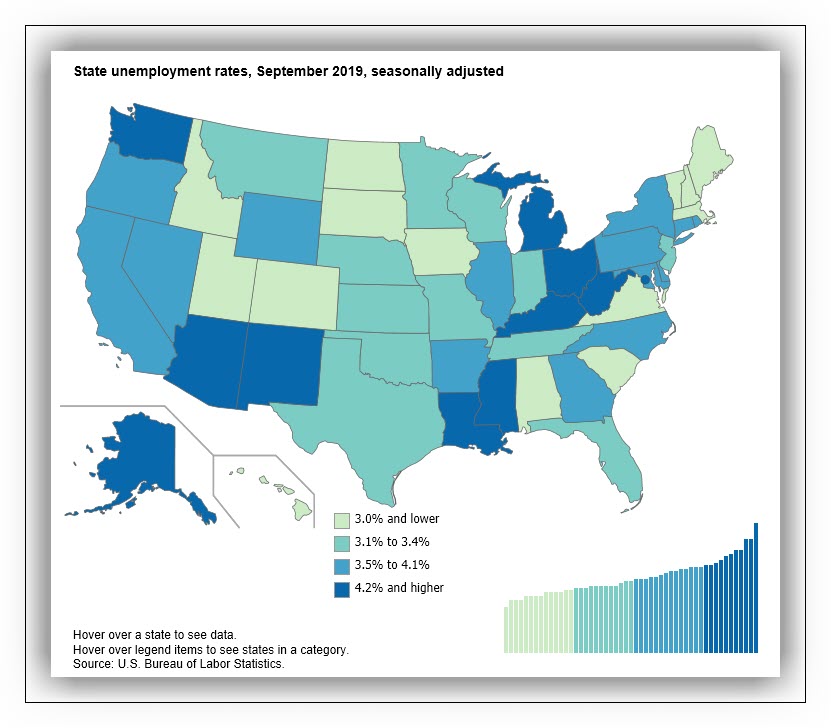 Not all states are enjoying the benefits of September’s 3.5% national average unemployment rate; in fact, 50% of the states have worse unemployment than the average and about 25% have much worse. Only 3 states enjoyed an increase in nonfarm payroll employment: Kentucky, Idaho and Hawaii.

14 States Have The Worse Unemployment Rate

Alaska is suffering the highest unemployment at 6.2%, with Mississippi next in line at 5.4%. Louisiana ranks 9th from bottom at 4.3%. Michigan and Ohio also fall in this category, voting their dissatisfaction.

California is a $3 trillion dollar economy, ranked the 5th largest in the world, so it’s 4% unemployment puts a drag on the national average. Pennsylvania and New York are also strategic voting states and fall in the slightly worse job category.

14 States Are Slightly Better Than Average

Texas has no state income tax and is business friendly which helps increase population which leads to jobs. When you add in Florida, Minnesota and Wisconsin plus the middle America states, you can see why better off voters can vote Trump another 4 years.

Vermont had the lowest unemployment rate in September 2019, at 2.2 percent. Something powerful is happening in Alabama, Colorado, and New Jersey which had the largest over-the-year unemployment rate decreases (-0.8 percentage each).

Table Of Unemployment Rates Per State For August & September 2019

Mississippi’s unemployment rate is the 2nd worst in the nation at 5.4%, but it hasn’t always been that way. It’s been worse. Since 1976 when the Bureau of Labor first reports data, Mississippi only had an unemployment rate below 5% in 2 out of the 43 years: from October 2017 to August 2019.

In summary, the unemployment rate is a misleading indicator of health. A steadily growing labor force is a better indicator since it means the population is increasing which leads to more jobs, higher production of goods and services, higher tax revenue for government spending and higher wages which leads to higher consumer spending which further drives new business formation and continues the domino effect.