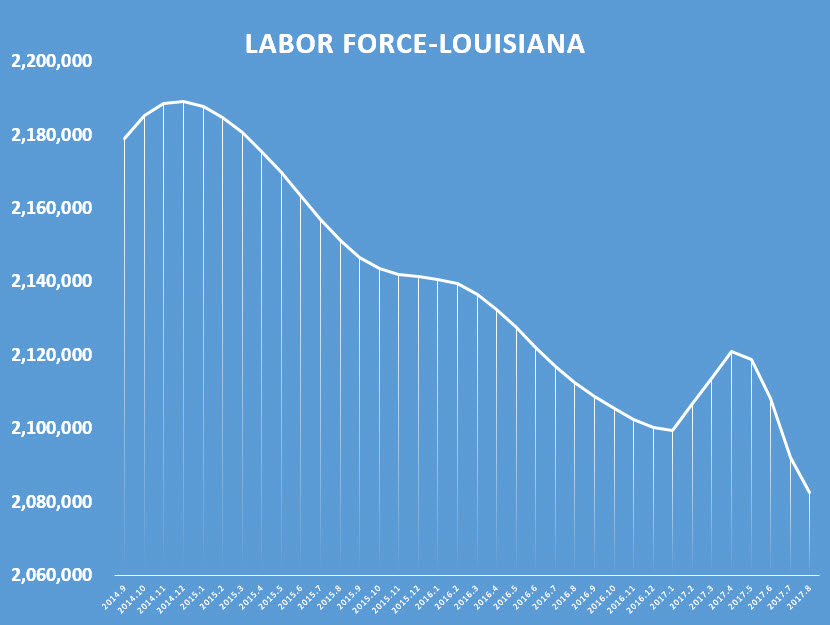 A plunging Louisiana unemployment rate to 5.2 percent means good times are back, right? Not so fast.

Even through the low unemployment rate was promoted not only by Governor Edwards, but also the Louisiana Workforce Commission, CNN Money, and US News & World Report, the fact is: things actually have gotten worse. If you work through the math and look at the facts, you will see why Louisiana has millions of disgruntled workers and why Trump got elected president.

The deception is that we assume if the unemployment rate has decreased, then the number of unemployed has also decreased, and the number of employed has increased. The tweets and press releases boast how low the unemployment rate has fallen but we hear nothing about the actual numbers. And it’s not like we can’t track the data. The Bureau of Labor Statistics tracks the number of people in the labor force, number not working, working, and the hours and turnover, for the nation, each state, county or parish and city metropolitan statistical area, and does so by industry NAICS code. Be smart about where you get your news and this article will help. The data is there but you have to dig through it.

So what are the reasons for decline in the labor force? One could be a declining population. In the 2010 census, the population of Louisiana was 4,533,479 and estimates for last year were 4,681,666, an increase of 148,187 people or .53% annual growth. Estimates of population increase for the last three years have been around 75,000, so that can’t explain the labor force decline. Another explanation is how the labor force calculation excludes those who have “given up looking for work”. They are called discouraged workers and are excluded for these reasons:

In summary, the last 3 years the Louisiana population increased approximately 75,000 and labor force declined 96,231. What would cause the labor force to decline during a period of increasing population? The best guess is the inability of baby boomers to keep up with a changing economy fueled by growth in technology. Add Louisiana’s 96,231 declining labor force workers to Michigan, Pennsylvania and Wisconsin to get the discouraged worker total high enough to generate 304 electoral votes that put Trump in office, and you’ll start to understand what is happening to the US economy too. This technological change leaving millions of workers behind explains why GDP growth will never get back to the 4% Federal Reserve target and why banks are proud to say they can offer a whopping 1.6% interest rate on 4 year CD’s. Until we retrain discouraged workers and put them back into the labor force, the US will never have more than a meager economy and soon will be left in the dust by stronger economies of China and India.

For more information on how the misleading unemployment rate defines our lethargic economy, read our articles:

*What You Don’t Know About The Unemployment Rate

*Does the US Employment Rate Affect New Orleans’ Economy