Construction has begun on a massive mixed-use development at the site of a former Canal Street surface parking lot led by a real estate development partnership with ties to Missouri billionaire sports mogul Stan Kroenke. According to plans filed with the city, Provident Realty Advisors of Dallas and The Kroenke Group of Columbia, Missouri are partnering in a development at 1535 Canal St. that would include a 400,000-square-foot, nine-story residential building with ground floor commercial space reserved for tenant use. 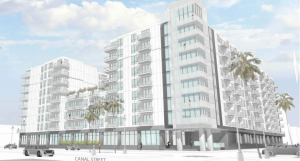 Commercial broker Robert Hand, president of Louisiana Commercial Realty, said this project is a great example of the confidence developers continue to show in the area. The Tulane Avenue and Canal Street corridors continue to be a hotbed of activity for investors in recent years due in large part to the opening of the $1.1 billion University Medical Center and the $1 billion Veterans Affairs Hospital.

Hand said he believes the housing market will be able to support these additional units when they come online in the coming years. “Many of the newer apartment developments along Tulane Avenue are near 100 percent occupancy,” he said. “So there is still a need for apartments in that area.”

The project also includes a 10-story, 187,000-square-foot, 500-space parking garage. The ground floor of the garage would feature a small pet park and the apartment units would be built around a 10,000-square-foot courtyard. The development is called “Canal Crossing” and offer 330 one-bedroom and two-bedroom apartments. A permit report lists the construction value at $61 million.

The parcel of land occupies an entire city block bounded by Canal, North Robertson, Iberville and North Villere Streets. It’s situated across from the vacant Jung Hotel, where a $130 million renovation is underway, and the former University of New Orleans tower, which is planned to be converted to a dual hotel.