Abutting the Lincoln Manor subdivision, near a shopping mall that Kenner officials hope will thrive, sits a 25-acre tract of commercial property that once was coveted by real estate developers but today looks more like a wildlife refuge. The Home Depot owns the undeveloped land, which is so badly overgrown that weed stalks, some taller than basketball goals, have completely swallowed a stop sign at 31st Street and California Avenue. The Home Depot’s land once contained residential subdivisions, but the New Orleans Aviation Board bought out most of the homeowners in the 1990s, to help settle a lawsuit over noise and safety surrounding Louis Armstrong International Airport. The idea, as with all airport buyout property, was to put the land back into commerce. 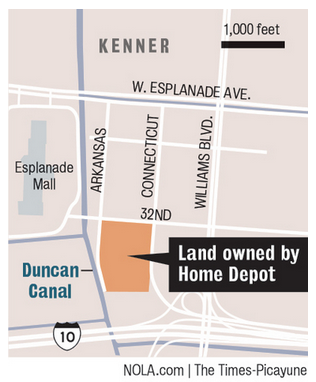 A spokeswoman for The Home Depot, Meghan Basinger, said the property is worth $25 million. The Home Depot is “aggressively marketing” it for sale and interest has been “steady,” she added, but she would not say whether negotiations are currently underway. Yet the property is not listed on either the Louisiana Commercial Database or Loopnet, which are the “two databases where commercial agents list their land if they really want to sell,” said Robert Hand, a Louisiana Commercial Realty broker who said he’s not had any business with The Home Depot. “They are not reaching 99 percent of buyers,” Hand said. “It is imperative that serious sellers have their properties in one of these two databases.” The property is the largest of its kind on the market in Jefferson and Orleans parishes, according to Hand’s compilation of non-industrial, commercial listings from the two databases. It’s also by far the most expensive. The Home Depot’s valuation of $1 million per acre, or $22.96 per square foot, is more than 50 percent greater than the highest asking price for the most-expensive non-industrial listing larger than 10 acres. That’s a 15-acre site at Mounes Street and Dickory Avenue in Elmwood, going for $15 per square foot. Hand estimated The Home Depot’s property could sell for $3 to $5 per square foot, and might take as long as five years to unload. Why would someone pay $25 million when they can get it for $4 million?” — real estate broker Robert Hand. “There is just no demand for large developments in that area,” Hand said. “Why would someone pay $25 million when they can get it for $4 million? The demographics don’t warrant that much of a premium. Maybe in the French Quarter.”