The numbers are out, but the numbers behind the published numbers will startle you. Yesterday the Bureau of Labor Statistics released the latest numbers on national unemployment rate; but the government also released numbers on Metropolitan Statistical Areas which include New Orleans and is included in this analysis.

What Are Metropolitan Statistical Areas?

A Metropolitan Statistical Area is one or more adjacent counties or county equivalents that have at least one urban core area of at least 50,000 population, plus adjacent territory that has a high degree of social and economic integration with the core as measured by commuting ties. 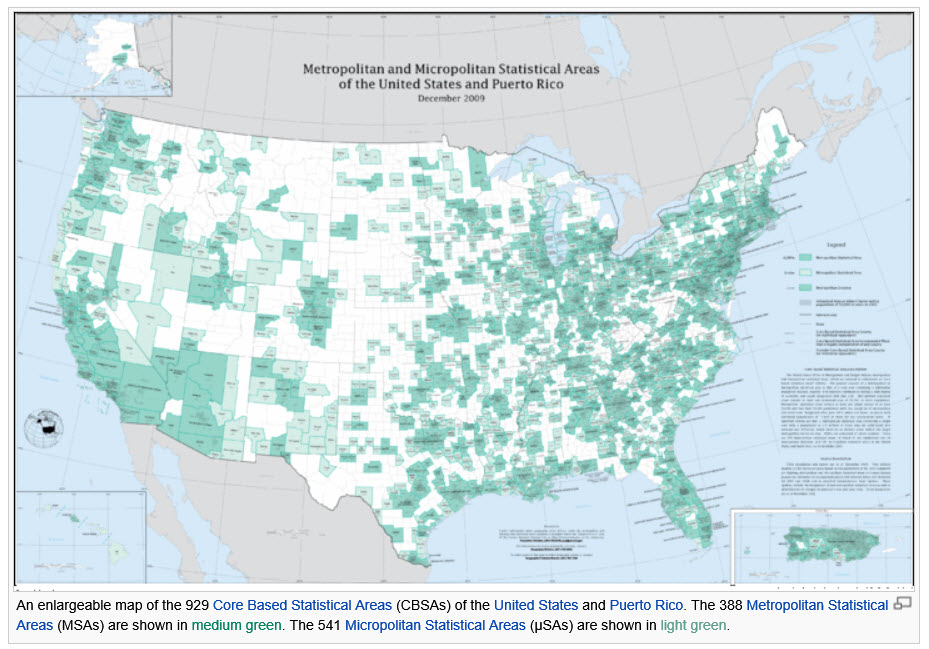 Unemployment rates were lower in August than a year earlier in 311 of
the 372 metropolitan areas, higher in 47 areas, and unchanged in 14
areas, the U.S. Bureau of Labor Statistics reported. Not all areas were similar, with 28 areas having jobless rates of at least 10.0 percent, and 41 areas
having rates of less than 5.0 percent. Two hundred and eighty-eight
metropolitan areas had over-the-year increases in nonfarm payroll
employment, 72 had decreases, and 12 had no change.  A total of 207 areas had
August unemployment rates below the U.S. figure of 7.3 percent, 158
areas had rates above it, and 7 areas had rates equal to that of the
nation.

The Numbers Behind The Published Numbers

The other side of the story is that there has been a massive withdrawal in the number of people looking for jobs, which affects how the unemployment rate is calculated. The chart below shows the labor force participation rate is at its lowest level in ten years. 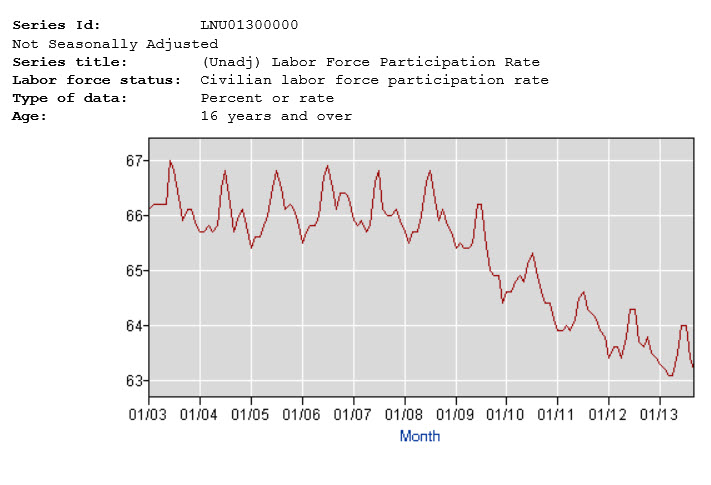 The numbers for the people employed compared to the population show we are still near a ten year low, as shown in the chart below. 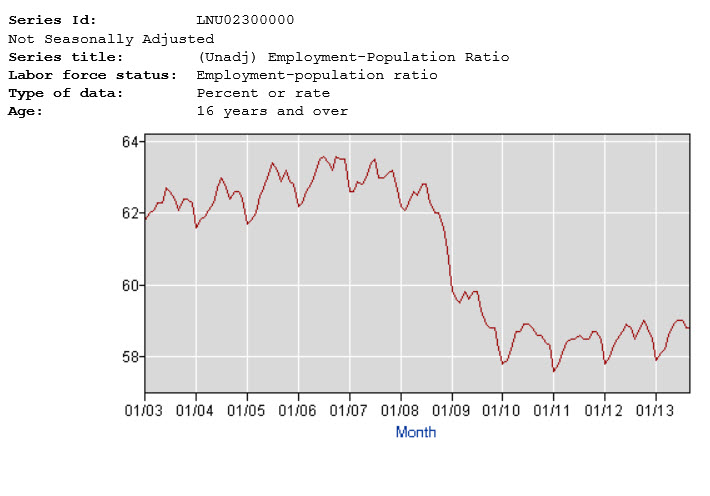 What Is The Real Number On Labor Force Growth? 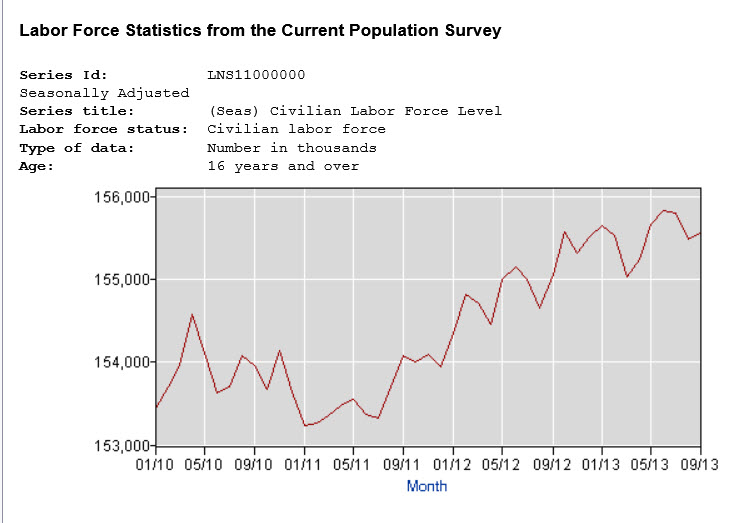 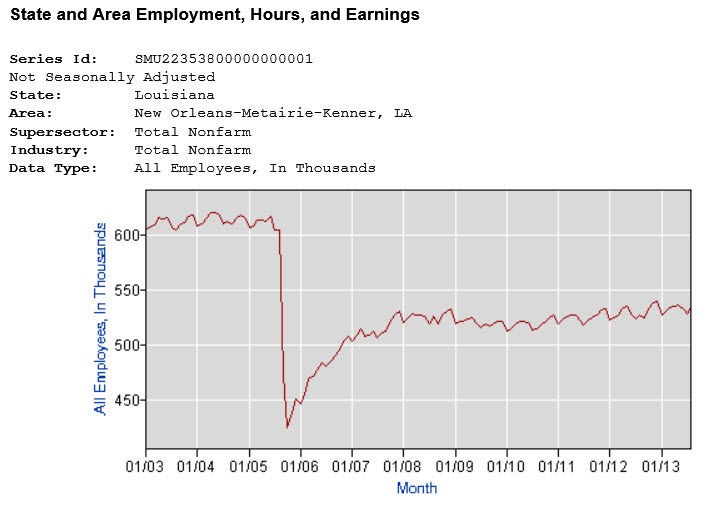 Since 2011, New Orleans MSA employment has increased from 520 thousand to 533 thousand, a growth rate of 2.50 percent total, or approximately 1 percent annual growth in employment, as shown in the chart below. 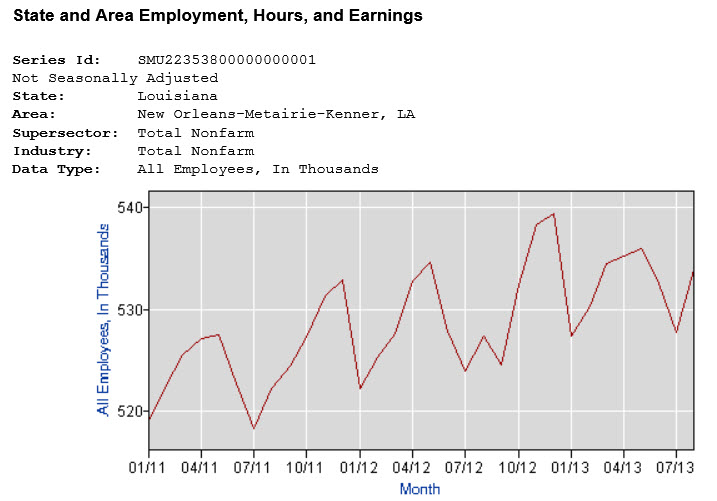 The reason we look at these numbers is to try to figure out if there are more people getting jobs which drives the economy in the future. The answer is yes, there are people getting jobs but there are also more people leaving the labor pool because they giving up or unable to find jobs. This makes sense in an economy where GDP was 2.5 percent growth in the 2nd quarter 2013 compared to the 1st quarter 2013, and 1.1 percent for the 1st quarter compared to the previous quarter, as shown in the chart below.  The number that makes the most sense is not a rate or ratio but how many people are in the labor force and how has that grown. The answer is the above chart on labor force growth is 155.5 million with a growth rate of 0.58% annually since 2010. The prudent and logical conclusion is that, even though interest rates are at their lowest levels in decades, we will continue to have a slow economy for several years, maybe even a decade. In a slow growth environment, cash flow from assets should do very well, and the conclusion is that New Orleans commercial real estate producing income from 5 percent to 10 percent can easily be found today, generating a real return over inflation of between 3 percent and 8 percent which historically beats any other asset class over the last decade. 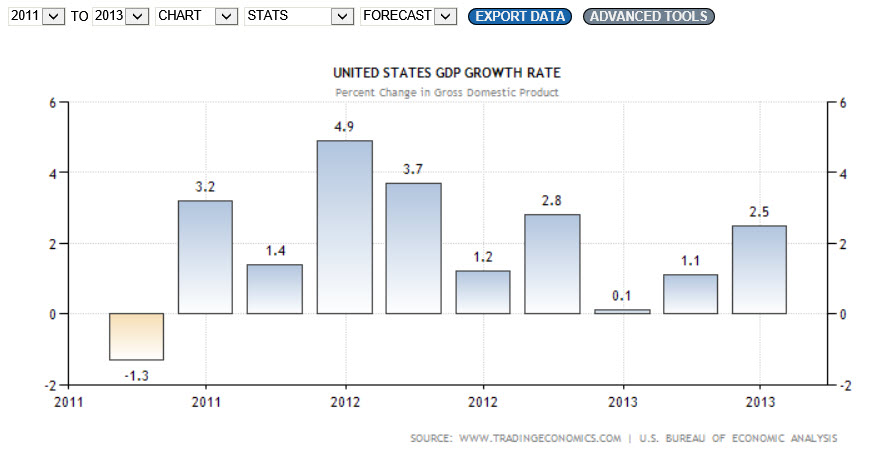 For more information about MSA’s, including maps, see our article at:

For more information about labor force participation, including charts and tables, see our article at: