Of those that own commercial real estate, there are more assets in rental property than in IRA’s, 401(k)’s and the median net worth of Americans. In the 2010 census, Americans were asked where they invested their money. Of the 118.554 households , the largest category of asset was the Interest Earning Account at a Financial Institution, with 69.8% of the households investing in that category. The second highest category was asset was a home at 65.9% of the households, as seen in the table below:

The bar chart below shows what percent of households own various assets, using the data from the table: 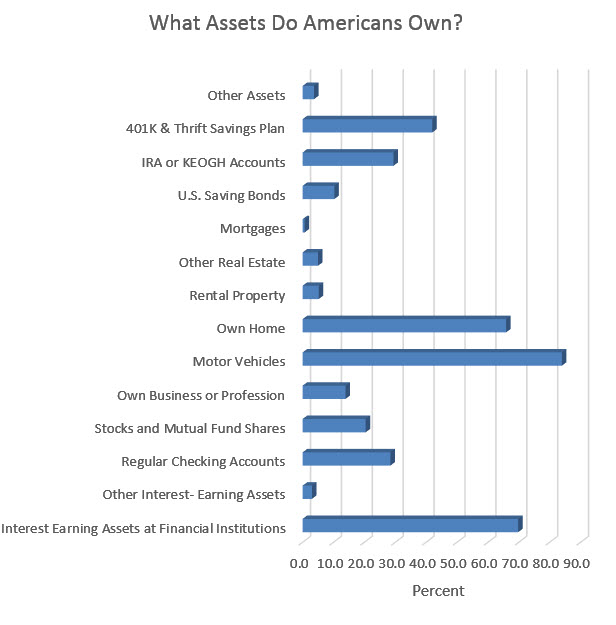 The value of the assets tell a different story, with the median value of assets in 2010 for the average American resulting in a net worth of $66,740, but only $15,000 if you exclude the equity in the home, as shown in the table below. The interesting number is the median value of commercial real estate, that is, rental property is $170,000 and other than home real estate equity is $75,000. So how can the rental property equity be higher than the net worth? Both numbers are after debt is subtracted. The answer is that not everyone owns rental property, but when all the values are calculated the values of rental property are higher than other categories. There is more than 5 times the equity in commercial real estate than in the average household’s IRA or 401(k).

Americans may have been created equal, but a vast difference exists between the races, as shown in the table below. Hispanics have less than 10% of the average net worth and blacks have 5% of the average net worth, compared to Americans as a whole. The economically disadvantages the two fastest growing populations, who have realized they control their destiny by voting the Democratic Party into office since the Republican Party has ignored their needs.

Another conclusion from the 2010 census was the median net worth of households according to education, with the median high school drop out having a net worth of 5% of the household with a bachelor’s degree. This is why we will continue to experience crime in New Orleans until we find a way to get more students through high school and into trade schools. The assets New Orleans commits to higher graduation rates will easily pay for itself.

NOTE: In dollars. Excludes group quarters. (B) – Base is less than 200,000 households. Individual outliers that highly influenced the mean value for asset categories were  excluded. “Other Assets” includes mortgages held for sale of real estate, amount due from sale of business or property, and other financial assets. Federal surveys now give respondents the option of reporting more than one race. There are two basic ways of defining a race group. A group such as Black may be defined as those who reported Black and no other race (the race-alone or single-race concept) or as those who reported Black regardless of whether they also reported another race (the race alone-or-in-combination concept). This table shows data using the first approach (race-alone). The use of the single race population does not imply that it is the preferred method of presenting or analyzing data. The U.S. Census Bureau uses a variety of approaches. Because Hispanics may be any race, data in this table for Hispanics overlap slightly with data for the Black population. Data for American Indians and Alaska Natives are not shown because of their small sample size. The race or Hispanic origin of the householder designates the race or Hispanic origin of the household. The estimates in this table are based on responses from a sample of the population and may differ from the actual values because of sampling variability and other factors. As a result, apparent differences between the estimates for two or more groups may not be statistically significant. For information on sampling and nonsampling error see: http://www.census.gov/sipp/source.html